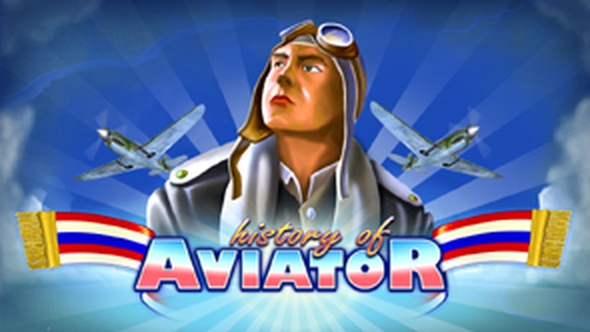 Play for Real Play for free

Get Demo for History of Aviator

Integrate History of Aviator demo game from DLV on your site or blog for free!

If you enjoy video slots that you can play for free for a bit of training, as well as hit the jackpot, then History of Aviator slot is your ultimate choice. History of Aviator is brought to you by DLV, the Latvian company behind state-of-art slots like Lucky Witch and SmakyBoo. DLV is no stranger to online gaming, providing the software for both online and land-based casinos from 1994. And History of Aviator is a new offering from the company that has over 400 skillful developers who are sweating daily to create new games for iGaming aficionados.

As you might have guessed, the History of Aviator slot machine is inspired by the life of Howard Hughes, an American business magnate, engineer, pilot, and film-maker. Most likely, you remember him being portrayed by Leonardo DiCaprio in Martin Scorsese's 'Aviator' (2004). At least you know what to watch in case you want to learn more about Mr. Hughes, as the slot that you can play with either three or five reels just took the inspiration for the design.

The fairly attractive symbol design can be divided into characters and typical slot symbols. But what makes this slot machine extremely attractive to gambling novices is its low-medium volatility and return ratio of 97%. So, if you want to learn how to gamble, and the lack of visual effects and background melodies is not a turn-down for you, History of Aviator is the best thing to start your foray into online gambling.

You can play History of Aviator in the browser or the mobile version. The screen of the game is divided into three parts, where, at the top, you can find the statistics line with two buttons. The first button allows you to enable the full-screen mode, while with the second button, you can activate the game options, which are the following:

The bottom section of the screen adjusts the number of active lines and displays the total bet's size. You can also find the indication of the game in the bottom section. Winners of the game have collected the row of similar symbols, like with all the slots. The row must contain at least three matching symbols.

History of Aviator slot online has a standard set of symbols, with Wilds and Scatters being the special ones. Granting up to five thousand in-game coins to players for the biggest combination, the Wild character is the most valuable in the game. As with the majority of slots, you can substitute any symbol with the Wild one, except the Scatter. If you have enough of the Scatters, you can activate the bonus feature.

You can find A Portrait of a Lady symbol, which bears an uncanny resemblance to Marilyn Monroe, in the game. Other characters include a Necklace and a Pocket Clock, as well as typical for video slots 10-A playing card symbols. They vary in combination price, with Lady being the most expensive one, as it can bring up to 1,000 coins for a five-in-a-row combination. The cheapest one is three J titles and 10, which grants you just 5 in-game coins.

Speaking of the soundtrack, you need to keep in mind that History of Aviator is available to play demo, and thus it's still incomplete. Most of the sounds that you can hear throughout the game are reactions to whatever happens in the game. As for now, there are no background melodies.

The bonus options of History of Aviator demo are a bit limited, but still quite promising. The first one, which is a standard bonus option for the majority of video slots, is bonus spins. If you collect three Scatter symbols, the bonus spin feature is activated. If you get another Scatter during the bonus rounds, the feature gets reactivated.

There's another bonus option, which is riskier than free spins, but, after all, gambling was always about taking risks. While playing the Gamble feature, you can use the option to guess the color of the next card, and in case if you've guessed correctly, the winning price doubles. But if you guess the color wrong, you lose the payline win. You can activate the feature if your wins exceed the initial bet at least four times.

Also, depending on the casino you play, the History of Aviator, you can get a jackpot bonus feature. Mainly it comes in the form of another Gamble mini-game where you can win a lot. Unfortunately, there's no progressive jackpot in History of Aviator, but as we've already stated, the slot is more or less designed for those who are new to iGaming.

After everything mentioned above, it's time to sum up History of Aviator. The slot has its ups and downs. Thus, we've decided to list them all for you to decide whether you'd like to try it out or not. Let's check the main advantages and disadvantages of the DLV-developed slot machine without any further ado.

As you can see, the pros and cons are 50/50. All in all, History of Aviator is a perfect slot for gaming novices that are more inclined to play it on their mobile device rather than PC. The lack of background melodies may not be a problem at all, especially if you prefer playing in the silent mode.

If you think that the game has enough to make you wanna play it, you're most likely wondering where to play History of Aviator slot demo. We offer you to check it out in the casinos like YoniBet and 1xSlots, as well as BitCasino and AdmiralX. And if you're new to iGaming, we strongly advise you to play the game for free before trying your luck with the jackpot wheel.